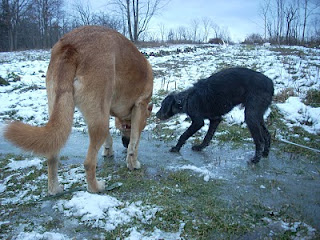 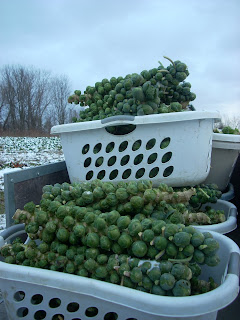 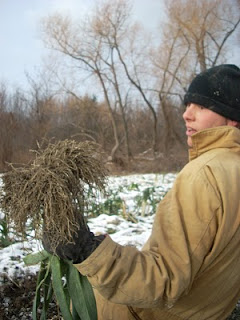 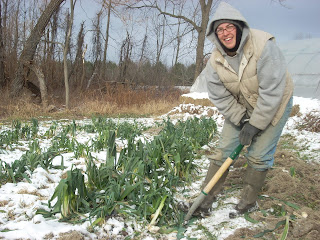 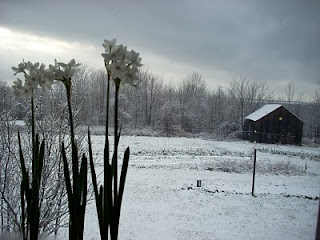 HI ALL,
Life here at Muddy Fingers Farm has slowed since our last newsletter post, but our to-do list is still full!
Here's a few of the things we've been working on.
Finishing the outdoor harvest. Most of the crops we are harvesting this time of year are inside the hoophouses, but there are a few that that have been outside braving the cold. These include salad turnips (at least we put some plastic down on top of them to afford them some protection), kale (can be harvested frozen stiff!) and leeks and Brussels sprouts (both of which we finished harvesting today and put in our cooler). Though calling it a "cooler" this time of year is not accurate. We've been running the air conditioner fan and turning on a small heater inside when necessary to keep the produce from freezing!
There are some crops we planted late in the season (onions, leek, carrots, mache) that we have covered by low-tunnels that we hope will survive the winter in order that we can get an extra-early harvest from them next spring!
And we are still at the market in Ithaca! If anyone would like to brave the cold, come on to Ithaca's outdoor market the next two Saturdays from 10:00-3:00. On the 18th of Dec. the market will hold the annual Rutabega Curl.
What, you may ask, do we have available at our stand? Brussels sprouts, kale, salad turnips, leeks, onions, garlic, celeriac, carrots, beets, parsnips, lettuce mix and heads and spicy greens mix.

We have also already started planning our next CSA season. We've been analyzing our crops from the records we kept this year. We will determine which are most profitable and which are least profitable so we can know which ones we need to improve upon our efficiencies in growing or even stop growing.
We learned last year that the CSA is an efficient way for us to market our vegetables - more efficient than at the farmers' market. Also this year our sales were down at our markets (except in Watkins Glen!). For these reasons (and for our sanity) we have decided to drop yet another market for next year. We are fairly certain this will be the Ithaca market on Tuesday. We plan to make up for this loss of income by increasing the shares in the CSA again next year up to around 90 shares.
We also realized the shares at the end of the CSA season (September and October) could have and should have been larger this year. There was lots of vegetables available, but we had priced our share for the fall to be smaller. Therefore we have decided to increase the cost of a share to reflect an increase in the size of a share for the months of September and October. We plan for the cost of a basic share to be $400 next year. And the cost of the larger share will be $520. We will still be providing the same 10-15% discount, only with more produce.

Offering low-income shares is something we have wanted to do for several years now, but we have never felt that it was something we were able to take on. But next year we are planning to raise funds for at least a few families to be able to join the CSA at no or reduced cost. More details about this later as we work them out.

We've also had compost to spread, eight months of messy farm to clean up and reorganize and/or repair.
And we've been loving this early blast of arctic air. We both love winter weather (though one of us enjoys working outside in it a little more). Soon we'll be able to go ice skating and hopefully cross country skiing, too.
Posted by Muddy Fingers Farm at 5:38 PM

If you drop the Tuesday Ithaca market, will there be a way for those of us from Ithaca to pick up our shares locally? Having each of us drive 60 miles could be a problem.
-- Bridget

Michael and I loved being able to use our market card at the elmira market instead of buying the share. It was so much less pressure and makes more sense with just the two of us. maybe you could get to more families if they got 100.00 cards instead of the entire share.