things are growing along nicely in the recenty lovely weather, here are some precious little kale plants! 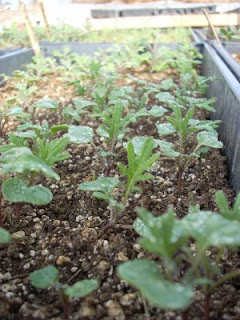 Since I last wrote, we've officially taken the turn from winter into spring, hooray! Today's rain showers remind me of the "may" flowers that will soon be blooming. 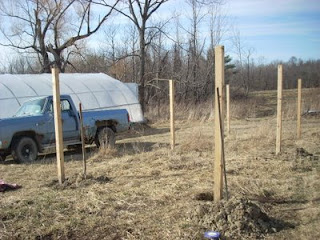 We were really excited to begin construction of our future trellis to support our hardy kiwi vines that we will soon be planting (wow, lots of future conditional stuff seems to be happening in that sentence!) 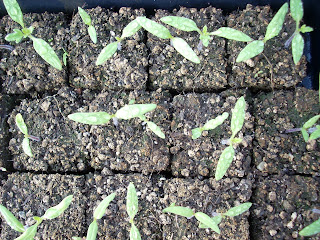 This year we are trying several new things in the greenhouse and two of them are evident in this photo.

First, we are trying out soil blocks for growing transplants. The soil blocks provide more volume of soil compared to the plastic trays with individual holes that we used to use. We would also like to reduce our use of specified plastic planting trays, currently we own about 5 different sizes because different plants need to be grown in different size cells. With soil blocks, we can just have one size tray- open, with no cells built into it, and we can adjust the size of the soil blocks that fit into it.

The plastic planting trays do last quite a while- in fact many are starting their seventh year of farming, just like we are- but eventually they will end up in the landfill. As, unfortunately the system for recycling agricultural plastics is still, shall we say, "under development". Not a huge deal with a small farm like ours, but adds up to a lot of waste at a large farm using a high degree of plasticuluture technology!

The second thing that is new in the greenhouse and evident in the photo, is that we will try grafting some of our tomatoes this year. Grafting is more commonly understood as a way to propogate fruit trees or ornamentals, but apparently many farmers are beginning to graft tomato varieties that are susceptible to disease onto root stocks that have been breed to not be tasty necessarily, but that have strong disease resistance as well as a hardy growth habit. We have sown two seeds in each soil block- one of the vigorous disease resistant variety and one of a scrumptious variety that we have lost productivity of to disease.

Once they have reached sufficient size, we will graft them together, discarding the top of the rootstock variety and leaving the delicous variety to be supported by the roots of the disease resisitant variety. In theory that is all there is to it, we'll see how we make out in our first attempt. of course, we'll keep you posted!

Also this week, due to the high number of checks that we have recieved written to muddy fingers farm, we have finally taken the steps to get an account in the farm's name, so that is an important growth moment in our little farm's history.

don't forget the first CSA event of the season on April 18th!
Enjoy the spring flowers!
liz and matthew
Posted by Muddy Fingers Farm at 6:02 PM No comments: 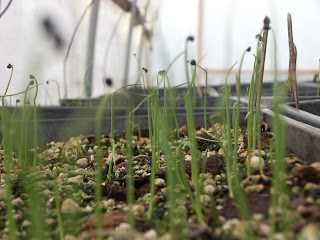 Today it is a lovely day! The sun is shining, the air is warm, the honey bees are out in force, and its hard not to be happy. We have a few daffodil bulbs that we "forced" to bloom inside and they are sitting on the porch today as we engage in some much needed spring cleaning inside, the bees, always keeping "busy", are all over them, fighting to get to the blossoms that are open. Its nice to know that the resident honey bees survived the winter (they belong to a friend who cares for them and we benefit from having them around, but not having to do any work!)

Things are growing in the greenhouse and our first tomatoe seeds are planted in preparation for transplant (perhaps some of them with your help on May 23rd) about 8 weeks from now.

This is my favorite time of year to look at onion and leek plants, each little plant reaching for the sky, sporting at the tip a tiny little seed coat, still clinging there and perhaps giving its last little bit to the growing plant. Eventually those seed coats drop and all evidence of their tiny origin is erased, but for now, the growth is so tangible, each time we look. 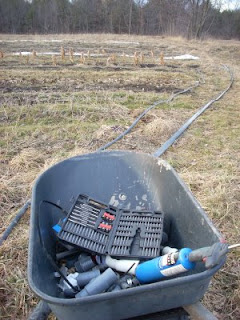 We have been reworking our irrigation system, replacing the 1 inch line with a 2 inch line out to our biggest vegetable blocks so that we can water more beds at one time. We moved some of the lines in the orchard around to in order to accomodate the new field that we will be growing cover crops in this year and vegetables in next year. We are plotting out where exactly to put our newest acquisitions this year. We have some more red raspberries and some new yellow and purple raspberries, asaparagus crowns, elderberries, hazelnuts, apricot, peach, and cherry trees and a few hardy kiwi vines to place. Its been fun to watch our plantings grow "organically" as we have money to invest in more plants as well as new ideas that make us want to take on a new project. Some no doubt will be failures, but many will be new sources of income and enjoyment for us (hooray for fresh peaches!) 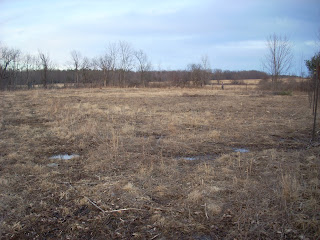 The CSA memberships are always a pleasure to get in the mail, only darkened a little by the fact that several folks have missed the back of the form where instructions about who to write the checks to are written (Liz Martin, NOT muddy fingers farm, please). Its so neat to read the comments written on the forms, it takes me back to when we were planning our wedding and we would race to the mailbox each day to see who had sent an rsvp postcard back as so many of those had little messages inscribed in the empty spaces. It really makes our day to read that people are looking forward to the produce, or thanking us for letting them get involved on a farm, the other day one arrived that just said, "can't wait!" i could really relate! Farming can be such a solitary occupation, with spring being so full of things to do that it is easy to feel overwhelmed, its great to have a relationship with those who all the toil will benefit and to feel appreciated by them, especially since we appreciate them so much! It is hard to overstate how helpful it is to us to get an infusion of money in the spring just in time to pay our farm insurance, car insurance, school tax, and self employment taxes for the year! Thank you so much for investing in our farm!
happy almost spring!~
liz and matthew
Posted by Muddy Fingers Farm at 4:18 PM 2 comments: 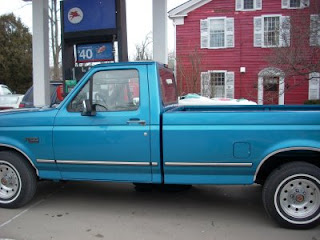 Hey all we picked out a "new" used truck and bought it yesterday, it seems like a solid, classic piece of detroit engineering. Its a really clean (with no rust), 5 speed manual transmission 1994 Ford F150. It has a nice big bed that will hold lots of produce. It should work very well for us. we also think we have a red cap lined up to go on top. We will miss our 1985 Volvo station wagon, but think we have a good home lined up for it.
stay warm~!
liz and matthew
Posted by Muddy Fingers Farm at 5:05 PM 2 comments: