Wanted for fence hopping: this chicken and two others that look very much like her. 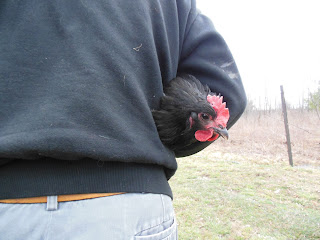 Amazing how little the onion plants start out!  Just green blips in a big field. 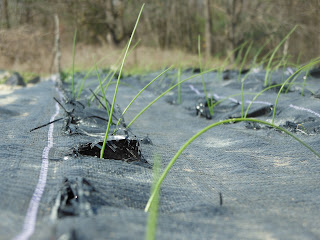 Planted these lovely potatoes the other day!  Can't wait to eat them! 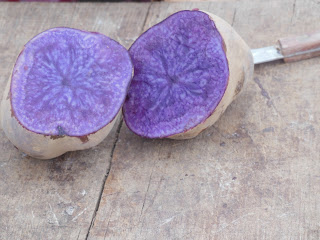 We're trying something new this year.  The last few times we've tried to grow spring broccoli, the plants haven't formed heads.  Upon closer inspection, it looked like an insect ate the growth tip that would have turned into the head.  In telling a farming friend about this he said with great dread, "it sounds like you have the swede midge".  According to the new york invasive species website, section on damage "As they feed, Swede midge larvae produce a secretion that breaks down the surface of the growing point of the plant and liquefies the cell contents, resulting the formation of leaf and flower galls and a misshapen growing point. Damage caused by Swede midge larvae feeding results in distorted growing tips and may produce multiple (or no) growing tips; young leaves may become swollen or crumpled and leaf petioles or stems may exhibit brown scarring. Swede midges feed only on cruciferous vegetable crops, such as cabbage, cauliflower, broccoli, and Brussels sprouts, frequently causing severe losses. The insect also damages canola, collard, horseradish, kale, mustard, rutabaga, turnip, and radish."  We haven't yet seen the culprit, and we may not, since it is a 1.5-2mm fly.  With a pest so small, the only hope of exlusion we feel that we have is to screen them out.  so the photo below shows the mesh that we hope will keep the swede midge off of the tiny broccoli plants. 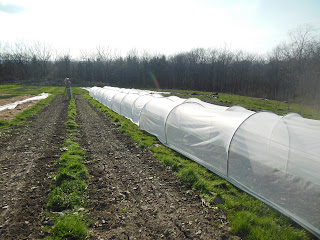 This is about the time of year that people start to think about the begining of the CSA.  The first pickups will be the first week of June, we'll look forward to seeing you then!  In the meantime, we have a little bit of space left in corning.  And plenty of shares available in Elmira and Watkins Glen.  If you know anyone who is in those areas, please feel free to spread the word.

Muddy Fingers Farm will be at the Local Foods Fest in Corning at the Union Hall on Friday 5:00-8:00. We have a few more CSA shares available for Corning pickup day and many more still available for Elmira and Watkins Glen. We will have for sale at the Foods Fest: eggs, parsnips and spicy greens.
Posted by Muddy Fingers Farm at 8:03 AM No comments:

True spring weather has sprung so quickly this year! It seems one day we were showing some friends around the farm and hopping over puddles and then a few windy days later- matthew is out preparing the soil. Now our first plantings are in the ground and what we hope will be a nice stand of cover crops were planted and watered in by a little rain last night. Except for the fact that two loads of laundry on the line got rained on as well, things are looking just peachy! 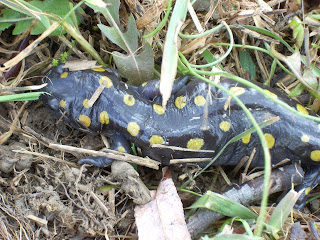 Our baby chickens moved out side this past week and they went to town eating grass and scratching for bugs like they had never had such an exciting job before! (Being only 8 weeks old, I guess that they never had had a more interesting job to do. But they took to it right away!)
been seeing lots of these yellow spotted salamanders around this year! 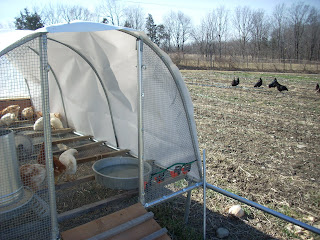 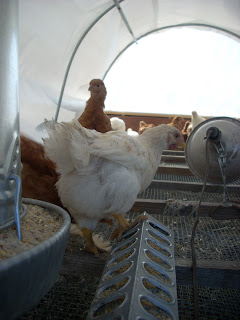 first week out, still get the heat lamp on cool nights!


A tractor trailer delivered our “seed” potatoes this morning-we didn't buy that many that we needed a whole tractor trailer load- but we will be planting 620 pounds this year. Seed is a misnomer here, because they are just the same as potatoes that you would eat, except they have been checked and certified to not carry potato disease (especially viruses) making them safe to be used as a “seed”for this year's crop- interestingly, there are only three common foods (that I can think of off hand) that you plant the same part that you eat as a whole. (They are potatoes, ginger, and sunchokes all three of which we do grow!  garlic could go in this list as well, but you don't plant the whole thing, just a clove.)


We look forward soon to a shipment that will contain our new tool for digging all of those potatoes that we grow from the seed! We'll use it to harvest garlic as well, and we hope that we will be able to dig carrots and parsnips with it, but are not sure if it will penetrate deeply enough into our heavy soil to dig the whole thing without breaking off all of the tips! That remains to be seen, we'll post an update if it works out!


The greenhouse is busting full right now and plants are outside in a “cold frame”, too. A cold frame is just a sheltered area where we can cover them up still at night. They spend a little time in this spot to help harden them off. The greenhouse is just so warm, and protected and perfectly watered. Plants that go straight from the eden of the greenhouse into the cold, windy, sometimes dry field can suffer. So the idea of hardening off is to get the plants used to a more real world condition, while still offering some protections, like sufficient water and some wind protection, but allowing the plants to experience the unfiltered light and cooler temperatures outdoors. After a week or so, the plants are ready to be put out into the big bad world.


One thing that I like about farm life, is that everthing has a season. While late February, March, and April are the time that we fill trays with seeds in the greenhouse. We are now moving into the time of year when we spend a lot of time removing those trays now filled with small plants and planting them out into the ground.


I really love greenhouse work; the way it smells like fresh earth in there, the way that it can be 25 and sunny outside and the under the plastic inside- the weather can be 70! (we have many times run inside for one more seed packet, and found ourselves surprised to be in a t-shirt in the winter!), and this year, they way the baby chicks peeped and cheeped, and otherwise enterained us as we sat in the sun, listened to the radio, and planted this years income into being. This is the first time we put them in the greenhouse from day one. They little day old babies seemed so fragile when they entered, but by the time we moved them out last week (they don't get hardened off much) they were little minature chickens ready to dig their own worms! Look for white and brown eggs from these gals in August or so.


We have found that after years of just growing veggies, it is nice to diversify our farm. While we feel conflicted about the added responsibility that having animals in our system adds. It seems right to add the diversity of animal manure into our system. Really our primary job here, is to encourage a diverse and rich soil ecosystem. This abundance underground contributes to lush, healthy crops above ground. Animals have long been a way to turn land not useful for growing food crops, into an area that is useful to produce animal protein. As our world becomes more crowded, we will need to effeciently produce food from the more and more marginal farm land that remains. At this point, we have no other animal additions in mind. Goat and chicken manure have proven to add fertility as well as biological diversity to our system and it feels right somehow to be feeding our soil from animals on our own land.


This rainy day has proven a helpful time to catch up on some office work, and on the blog, which I see has been ignored as we have been on our winter vacation. Worry not, we are back in full swing and food is growing for you now!