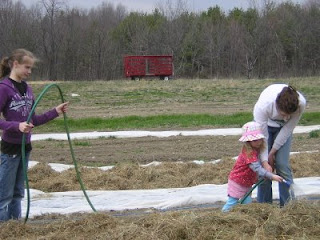 watering in the broccoli at last month's event.

So many thanks to cindy, tamara, joy, sarah, emily, jeanine, suzi, john, carolina, juliet, mary, david, chris, harold, and sarah for helping us have such a nice weekend! We had a tasty potluck lunch and then planted the last of our late season potatoes, the last four beds of slicing tomatoes, and put up a hundred tomato cages (a job that isn't too bad in a group, but can be a drag to do one cage at a time by ourselves.) It was a fairly warm day, but no chance of it raining and "spoiling our fun", it was sunny and dry as it has been for quite a while. It was a touch warmer than i would have scheduled it to be, but everyone was in good spirits and it was nice to have a group out to the farm. Thanks to those who could make it, we are working on scheduling our june event and hope to put it out there soon as to what it will be and when.

We are getting ready for the csa to start on June 2nd the first pickups for everyone will be that week (June 4,5,6) mark your date books accordingly! 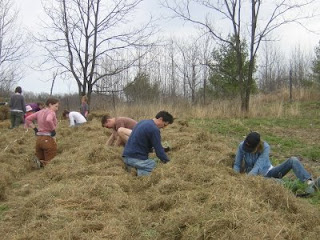 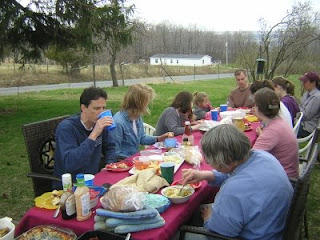 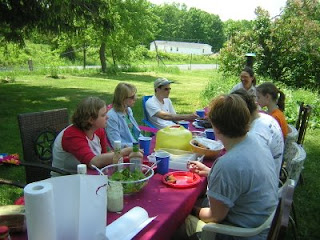 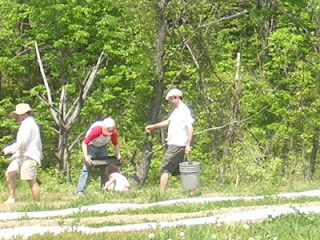 
there are lots of birds nesting around the farm right now and some of our guests got to see the neatest little nest i've ever seen. the bird hollowed out a nest in a hay bale that is starting to break down. I guess it beats carrying all the hay into make a nest, just carry the hay out and make a hole! there are three hungry little song sparrows growing up in there. the starlings just fledged from our carport, so its been much quiter in there lately, though i believe soon we will have baby barn swallows to keep it lively in there. at any rate, soon we'll be posting weekly, check back then.
until then, have a great week!
liz and matthew
Posted by Muddy Fingers Farm at 9:53 PM No comments:

These are my last few hours ever.

My last few hours ever in my twenty's anyway, I turn the big 30 tomorrow! now neither of us can be trusted, i guess.

Again longer than we have meant has lapsed since we posted. Things are coming along swimmingly, and hopefully lots of people will get a chance to see that this weekend when they come on up to our second "pre-season" CSA get together on saturday. we'll have a potluck lunch at noon and then do some "season appropriate" transplanting for an hour or two. We really appreciate those who come out to see the farm, meet people, help build our farm community, and of course, a hand with farm tasks for an hour is a huge help to us and hopefully not a huge burden to our members! We have some standing tasks for people who find it difficult to get close to the ground as well as for those who find that easy, but getting back up to be hard! 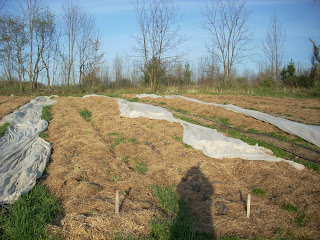 this is taken from the same spot as a photo in the last posting. Its all planted, and now the plants are much more visible above the hay mulch.

We are ahead of where we have been in the past in our transplanting and planting. Partly this is in part due to how incredibly dry April was at our land, we didn't have much more than half and inch of rain fall on our place, and most veggies want an inch or rain a week. The dryness helped us to get the field preparation work done, but it also meant we were doing quite a bit of irrigating, and our pond is dropping already. (we don't mind seeing it fall in June, but in april (which is when we noticed it) it is scary because, what is in there may be all the water we have for all season, in the event of a severe drought.) 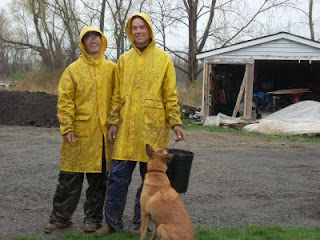 the other reason that we are ahead is that we were lucky enough to have a friend stay with us for a week. He was a huge help, cheerfully working on whatever tasks we needed help on, even picking rocks up so that we won't find them with the lawnmower later. Rain or shine (we did have little shower while he was here) our friend steven was ready with a smile on his face. Thanks so much Steven, if you are reading this!


Last time i wrote about several presentations that we had given, we were excited to give one more recently- i appeared at a middle school career day. I was so glad to see that they had thought to invite an agriculture representative to a career day. It was really neat to see young people interested in a career in agriculture. While preparing the presentation, i learned or relearned several interesting agriculture facts.

Only one percent of americans are farmers. (though 2% live on farms).

Of that one percent of the american population who are farmers, the average age is 55, with only 6% of farmers under the age of 35.

there are currently more americans in prison, than there are american farmers!

we talked about how important it is for young people to be interested in becoming farmers because as the "average" farmer ages and heads toward retirement age, who will feed us? according to the EPA, each day the US loses 3000 acres of productive farmland, no doubt there is a risk of that increasing in ten years when the "average" farmer retires if there is no one ready to take over their farmland. it was great to get to be a youngish farmer talking to potential young farmers of the future. I'm so glad that i was asked!

its asparagus season! Hope you are indulging in fresh, local asparagus- and often! Tonight we enjoyed our sauteed with some overwintered leeks and chick peas drizzled with balsamic vinager and plenty of black pepper. We served it with pasta, and let me just say, YUM! this year, as we have previously said, we planted asparagus ourselves! It will be two years before we will be harvesting any, but its nice to have it started anyway!

this is what the crowns looked like when we planted them. 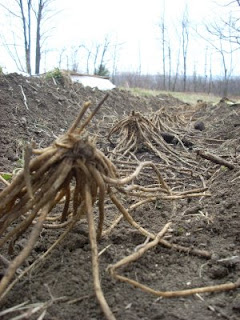 and this is the first peek we had of them coming up through the soil. Now they are just fronding out and are about knee high. 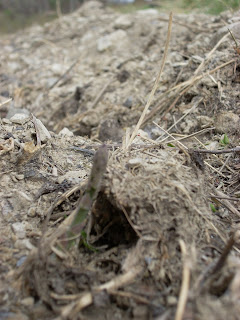 its supposed to be pretty chilly tonight, frost warnings abound. We have a few beds of tomatoes in the ground already, so here they are, all tucked in for the night, hope they stay warm enough in the next two nights! 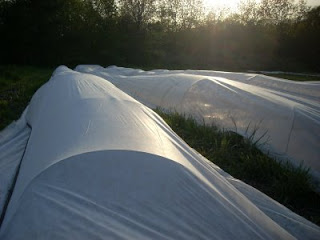 thanks for checking in with us, the CSA will be starting before we know it, only two weeks to go! Liz (and matthew)
Posted by Muddy Fingers Farm at 9:38 PM No comments: