This time of year... 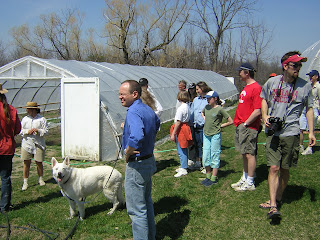 This is the time of year when we spend a lot of time outside. Between ten and twelve hours a day! When we come inside for the day, a fancy dinner is far from our minds. Salad, pasta, salad, soup, or quickly tossed together chili are often on the menu --ocassionally popcorn or ice cream is what's for dinner. We've been really enjoying fresh asaparagus season, don't miss out! If you've never had fresh asaparagus raw, make sure you give it a try, it is a truly delicious spring treat, its also great lightly cooked or sauteed and then eaten as is or in a sandwich, omelette, tossed on a salad, or in pasta.

What gets us through those long days? Lots of snack breaks, cold popsicles, brief games of badminton, listening to and watching the birds, and our best farm tool, our solar powered radio! We get to stay current on the news and be entertained as we work our way through our day's to do list, its such a great way to spend the day!

I know its probably a real disappointment to check this site and see just how infrequently we up-date it, but dont' worry during the CSA season it will be updated weekly with farm lore, news, what's coming up, and recipes on how to use the produce. I've been having a hard time mentally over coming the hurdle of going from an email newsletter to a blogged one. I realize that what i write in an email that i zip out to all our members is way different than putting it up on the blog where anyone can read it. For example, what if i write about how are neighbors dogs are really annoying to us because they bark at us all day long, and when we go out at night for night walks around the farm they bark then, too. My neighbors could read it and be offended. Or what if i'm waxing poetic about our last fire in the woodstove for the season, and my insurance agent reads it and cancels my policy because wood stoves are not covered by my policy? Its a totally different thing to spin my words out and then leave them hanging for anyone to read and react to. A good friend told me that i have thought way too much about this, but i do have a lot of time to spend thinking, so what can i say?

We had a great turn out both on april 19th and again for our second pre csa get together on may 24th! And we got lots of jobs done! Thanks to one and all for coming out and helping us get the season started on a very nice note! (If you missed one or both, don't worry we plan to hold monthly events on the farm, hopefully you can make the next one.) The only disappointment i had about this past saturday's event was that the turtles that are normally sunning themselves in our pond were no where to be seen for our guests. Hopefully next time! For those who came on up on the 19th of april, the things you planted are looking great, the fava beans, regular beans, and potatoes are up, and the onions are growing a long nicely. (Though some rain would be nice.) For those who were here on saturday, the basil is looking really happy, the tomatoes, onions and celery/celeriac are also doing great so far.

I feel i can't make a posting and not mention some of our feathered friends, watching and listening to the birds fills our day with so much joy! We have been actively trying to attract more birds to our farm to increase biodiversity, and aslo because they help to keep insect populations down, especially pests. The other day, Matthew was looking out the window, and saw a sparrow sweep down and eat a cabbage moth "on the wing", they are the ones that leave little green caterpillars in the broccoli and cabbages, and they are one of our biggest pests! Go sparrows! We put up two nest boxes this spring, and almost immediately they were occupied, one with a house sparrow, and one with a tree swallow nest, we had never seen tree swallows around here before, but everytime we see the shiny greenish back as the male swoops for insects, we are glad.

Its very hard not to personify swallows. We have barn swallows that nest in our car port and you can just swear that you can hear them having a conversation as they sit on a beam and chatter at each other, and they are very brave, not showing much concern about humans walking right underneath them. When we put the new nest box out the tree swallows sat outside of it and chattered. You could almost imagine one saying, well the neighborhood seems good, look at the view, wonder what the neighbors are like, etc....Then they choose one of the nest boxes and moved in. We learned that when tree swallows mate they make a lovely clicking noise. Must be the male singing out his joy, and it is a very happy sound!

The biggest bird presence though right now is our killdeer couple who are nesting in one of our growing beds. These are birds that look and sound like shore birds, they have long legs, two black rings around there necks and make a sound that sounds like "kill deee, kill dee, kill deee, kill deee" over and over and over and over again, i think you get the point. They nest on the ground, all the nests i've ever seen have four eggs in them, that look like gravel, grey with black dots. When the nest is approached the birds use one of two strategies to protect it. For predators, they adult will hang one wing to the side and flutter the other, it looks like the bird has a broken wing, as the predator approaches it, the killdeer will run off and do it again, luring a predator away from the nest. For larger animals, or slower moving ones, (like for example a cow, horse, or deer, also tractors and sometimes humans) the bird on the nest will hold still until the animal gets close and then burst up from the nest, hoping to startle the feet (or tires) off of the path and save the eggs from being crushed. For the most part, we have working agreement with this intrepid couple. We steer clear of the nest and won't plant near it until the young hatch, and they eat worms, grubs, and insects, and try not to trick us with the broken wing thing too often. We expect the hatching to occur on or around June 7th.

This year we have been busy not only with regular every year things, but also with planting for the future of our farm! We have doubled the blue berry and raspberry plantings this spring, we put in 8 new fruit trees and have planned what we hope to put in next spring to fill up our orchard. I (liz) have started to think about putting in some more perennial flowers so that there are more options for bouqet making at the farm. And we have plans on putting our own asparagus patch in, first we will be putting a cover crop in to help eliminate weeds, then we will put the asaparagus in next spring or the one after, depending on how the weed reduction is going. We'll keep you posted!

Posted by Muddy Fingers Farm at 9:30 PM No comments: